Here we are again.  At a place where there is  vast gap in blogging.  In that gap sits hundreds of stories and experiences that were fully lived, fully enjoyed yet completely undocumented.  Yes that is ok.  Life does actually happen whether the internet knows about it or not.  But I like to lay it out on here.  I still have not decided why.  But mostly it is therapeutic for me to think out life this way.  I really look forward to comments but don't typically get many and I understand why.  I haven't decided if I am to just start in as if the last 3 months didn't happen or go back and try to cover it all in retroposting.   Still undecided on that one.  For now I am going to cover this past Sunday.

I re-became an eventer again!  I think I had even gotten to a point where I wondered if I would ever actually get out there and do it again.  But it happened.  It wasn't a recognized event but a one day horse trial.  Oh and I think it was our first real Novice experience in all 3 phases!  So I guess it was a re-intro to eventing and a move up!

I was a bit apprehensive going in.  I knew we could do it but it was a matter of, would we?  You know all the, what ifs, and I'm too old, and I'm too out of shape, what if Steady doesn't want to play todays ran through my head as I am driving on the open roads at 4am on my way to Spring Run Farm Near Louisville, KY.  I decided not to over night the night before and hoped for a later ride time.  Lo and behold when ride times came out I was the first rider of the day.  Of course!  So it was an early morning.  The other part of this story is that Elaina and Lego were also competing in their first full beginner novice event!  The two littles came along too to help out.  And of course Hank the wonder Corgi came along.  2 Horses, 3 kids, 1 Corgi, 1 adult and 6 ride times in 5 hours!  Talk about hectic!

The day started with me in dressage.  It has rained an ungodly amount in this part of the country last week.  Dressage warm up was out side on not awful but kinda sloppy footing and morning dew.  I decided to go with the unconventional dressage warm up.  The only advantage I have sometimes with Steady is that I know him very well.  And I know if I even attempted to canter in that mess he would slip and ultimately begin a downward spiral into his stressed out frenzy he does so well.  All I need is relaxation out of him and we can figure the rest out. Perfect and ideal?  No but nothing in this sport ever is.  I walked for %95 of my 20 minute warm up and trotted around once both directions and called it good then made my way to the indoor where my test was.  I didn't like the indoor one bit.  It was a tight space.  Steady was relaxed, behaved and obedient.  I ask nothing else from this horse ever.  I could have rode better.  Like usual I get put off in a test and ride with less leg than normal but one big improvement I have made is that I didn't ride with too much hands.  That has been a big fault of mine in the past when I get nervous in a dressage test.  I felt my shapes left much to be desired.  Steady had one bobble in the canter to the left he broke but picked right back up.  Just a miscommunication on our parts.  I knew he was getting behind the vertical in places (read lack of use of leg) but not too excessive.  And if the horse can do nothing else he can kill a free walk.  Over all I was happy with the test.  To my surprise when I checked scores my test was better than I imagined.  We started the day out with a 27.3 and in first place!


There is something about starting in 1st that puts the pressure on.  Like don't screw this up!  But I did my best to shake those thoughts.  I really just wanted myself and my daughter to make it around safe and go home with some experience and learning under out belts.  Stadium was shortly after.  Again my unconventional warm up for my unconventional event horse.  Jump warm up was Sloppy, sloppy sloppy.  Far worse than dressage.  So my plan was as little as possible to know that he knew it was time to jump the sticks.  After so many years of all of this it is nice to be on a horse that you know knows his job.  He doesn't always want to listen to me but he does like his job and knows how to do it.  We trotted the X the cantered the Oxer.  First time over he ran off a bit after so we did the oxer once more he was polite enough for me and that was it.  Then it was to stand around at the gate to get him relaxed.  I am pretty much a, do as I say not as I do person when it comes to this.  I would not do this on any other horse but this one.  But I know that for Steady the, Picking up your feet and jump the things is the easy part.  Keeping your head in the damn game is the hard part.  Life goals with him; keep his head in the damn game, nothing else matters.  We went in and did our thing.  We don't really go for the hunter round but we do typically go in and jump all the things.  That's what we did.  He got fast in really only one spot after the 6a-b combo to 7.  A couple arrogant head tosses in tight turns but clean and clear.  We are holding steady on our dressage score.

XC got a bit exciting before it even started.  I asked for permission to ride out of turn because Elaina's dressage time was 5 minutes before my scheduled xc time.  I had to coach Elaina and get her through her test before I could head out on XC.  I was completely ready and holding my horse while walking her to her test so I could jump on and go once she was done.  There should have be enough time.  Buuut they were running ahead and apparently were calling for me over and over on the loud speaker.  I got scolded by several people and tried to get the message through that I was riding out of turn with permission.  I made sure Lego didn't do his signature jump out of the arena on the canter circles. I told the ring steward to tell E that, I love her, she did awesome but I had to go.  The start box was a bit of a trek so I decided that would be my warm up.  I trotted down the path, yelling excuse me to the pedestrians then cantered the up the hill.  Told the warm up steward I just need to jump one jump and then I'll go to the start box.  But the first jump was a mess.  I am sure Steady was like what the hell is going on here, oh shit we're jumping again.  I lost my stirrup and the thought crossed my mind, shit I'm gonna fall.  Thankfully I didn't.  I kept on cantering and thankfully the organizer saw the awful jump and said I could do it more.  I was like, sweet because that was shit.  He sailed the second time and I cantered to the start box.  I have to tell you that after over 2 years not hearing them, it felt amazing to hear these words again.  "One minute!  30 Seconds! 10, 9, 8, 7, 6, 5, 4, 3, 2 Have a good ride!!!"  They are music to an eventers ears!  We are BACK Steady let's do this!

He started off great.  He was adjustable yet still in his Steady fashion of attack mode on XC.  WHAAA my horse adjustable on xc?  This was a first! Yes he still got fast in a few places and I had to brake check him but he was listening!  He was thoughtful and careful on the slippery hill down to the water.  There was a decent galloping distance up a hill and he was cantering along nicely I thought.  Hey this is a change, I'm going to ask for more just to let him know he can go when I ask.  That I am not Always the party pooper.  I said the phrase, "Git it, Steady!"  and holy shite!  It was likened unto hitting a nitrous button in a race car.  Mid steep hill he just accelerated like lighting.  God he is a effing cool horse.  The power he has is mind blowing.  But before you know it we were at the next jump..lol and I had to do some break checking..lol.  But he did come back and that is all I ask.  I even got the trot step before the down bank that I wanted.  I most likely can't properly convey what it is like to ride XC on this horse.  He just swallows the jumps whole.  Never takes a second to
look at them.  I say go and he just goes, no questions asked.  There is nothing like it.  18 jumps later and we were on that XC high just passed the finish flags.  Double Clear for the win!

That's the way a 36 year old mother of 3 makes her way back into eventing!  With a fucking BANG! 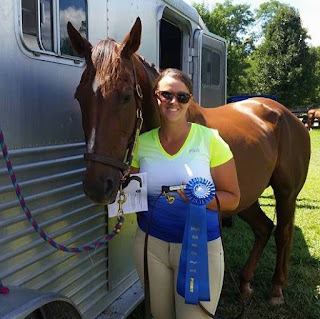 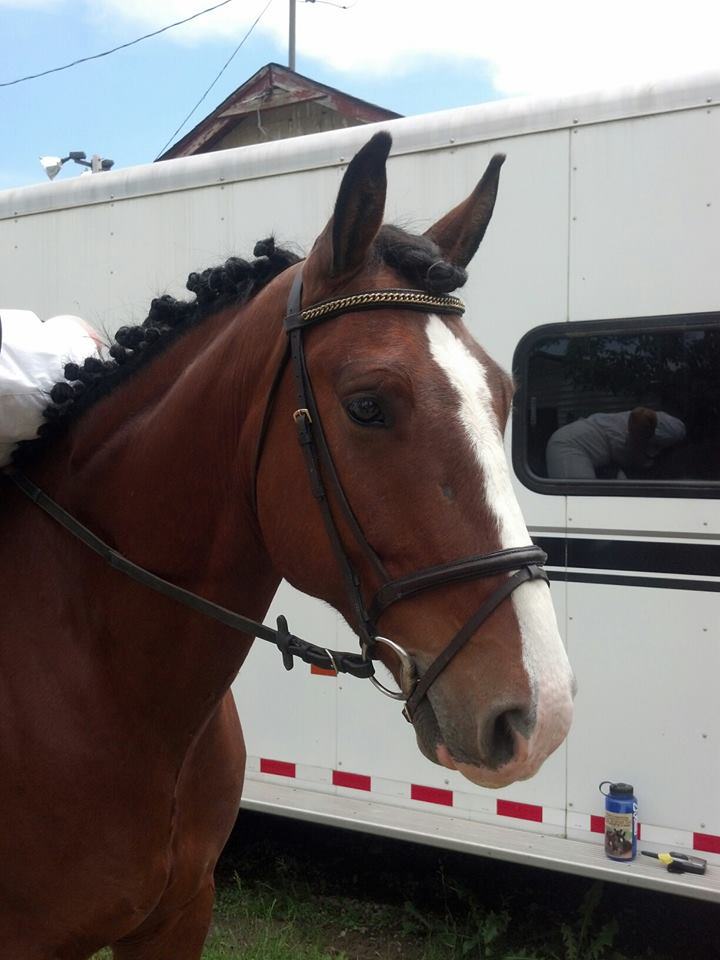